How Do You Handle Disappointment In The Bedroom?

How Do You Handle Disappointment In The Bedroom? 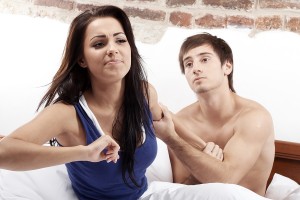 Disappointment sucks. In the bedroom it can bring debilitating shame. What can you do and how can you handle it?

Cathy: Cathy Vartulli from http://www.TheIntimacyDojo.com. We are not talking about sleeping with ponies, not that we judge anybody who does.

Reid: I’m just going to be quiet for the rest of this video.

Cathy: What we’re actually talking about is disappointment around sexual issues. We’ve just done some other videos where we talked about how to deal with disappointment, how to reframe it, how you might be able to get around it or find … use it as a signal light that something needs to change. When we come to sex, it can be really challenging because our sexual expression is a lot about our acceptance. It’s very vulnerable. If you want to have sex with someone and they don’t want to have sex with you, that can feel like they’re saying that you’re not worthy or shameful. We make it mean a lot of different things. Dealing with disappointment around that can be even more intense for a lot of people than say the friend, an example we were using before, like a friend doesn’t do the dishes. What do you recommend?

Reid: There are so many ways I can go with this, and I’m just going to focus on answering the question. There’s couple of different things that are happening all at once. Like you are mentioning. There’s the cultural things about what having sex, and what somebody not wanting to have sex with you means. How we take those things personally, and then in this vain of videos we’re talking about expectations. Do you have an expectation that they’re supposed to be yes? This really isn’t a gender thing as much as because men and women, this happens to all of us. Do you have … what are the cultural meaning you should put onto things? Most of those meanings are given to us by culture and environments, and magazines, and the media that we are surrounded by. A lot of the reasons people say no have nothing to do with you. You just get mugged by a bunch of meaning making that you’re doing or the ‘no’ all of a sudden reinforces, and makes real something you thought about yourself.

In video three we’re talking about things like childhood. Usually things you think about yourself that got anchored like in fifth grade or third grade or six grade-

Cathy: They don’t like me as much as they like someone else. They are not going to invite me to be part of the team.

Reid: Then sometimes your disappointment actually coming up from the fact that, “Wow! I haven’t had sex in a long time, and it would be really nice to be expressed in that way.” Just like with cuddle party and cuddling and just touching generally. Sometimes you are just starved, and skin hunger is an actual medical term. There’s this kind of disappointment that’s coming up from that need. Usually what’s happening at least first, is that you’re getting clobbered with cultural meaning, and then all of a sudden this means something about you.

Cathy:Skin hunger like you said, is a real thing. After three days of [inaudible 00:03:01] you start actually getting cranky if people don’t get some kind of touch. If there’s-

Reid: Some people not everybody. There are lots of people who are fine with it, but physical isolation or things like solitary confinement like in prison and things like that. Luck of touch and social interaction can wreak havoc on you psychologically.

Cathy: Sexual expression with other people isn’t required. It’s not a need. It’s a delightful thing we have, but it’s not something we actually need. Though it can feel like it sometimes.

Reid: Yes. No one ever died of blue balls, ladies and gentlemen, and you can tweet me on that.

Cathy: Dealing with that disappointment, one person had written in and said, “He doesn’t want to have sex with me at all.” And that they are feeling a lot of upset about it.

Reid: They don’t want to have sex with you at all?

Cathy: Someone was saying-

Reid: Oh with me, the person who wrote in?

Reid: Okay I was trying to figure out what was going on.

Cathy: They were telling me, they never wanted to have sex. I never met them.

Reid: One viewer wrote in and said, “They never want to have sex with me at all.”

Cathy: Thank you for clarifying. They were trying to deal with someone they’d already had a really intimate relationship, was now no longer sexual. No matter what she did, he didn’t want to have sex with her. I wanted to acknowledge you. I understand that it can be so painful. It can feel horrible because you’ve built up this connection. You probably have some chemical things going on, that your body remembers of being close to that person. Oxytocin, dopamine, all the things that go on when we have sex. There is a longing for those good feelings. There’s probably a longing for that particular type of connection that’s really beautiful. There’s again the social stuff going on. If you want to take the social stuff out, realize what she made it mean that he did sleep with you or she or whoever what gender it is. If you felt like you were worthy, and you weren’t shameful, and you’re desirable because there they slept with you, it might be something you need to work on so that you feel desirable whether someone sleeps with you or not or releasing the shame.

Those are really challenging topics, but is possible to make a difference there. In terms of, you may never be able to get that person to want to have sex with you again. It just may be the case and that’s hard. Learning to get your needs met in other ways, either with that person if they want to connect with you in different ways, or finding other people for touch. Different things that will bring on oxytocin and dopamine because humans do needs the kind of-

Reid: All the monkey needs you can get met that happen without the sex having to happen.

Cathy: Right. I think it’s, at least I’ve noticed a lot with women, I don’t know either of your feedback on how men are socialized. It seems like we’re taught we need to get it from one person or a bad person. Like there’s got to be-

Reid: Or bad person? What does that mean? I’m intrigued.

Cathy: We’re supposed … prince charming and that could mean hetero-normative just for this, because that’s how I was socialized. Prince charming, if I’m good enough and I sacrifice long enough, and I’m desirable enough then prince charming will ride up and meet all of my needs. To whisk me up to the castle where I don’t have to worry about money. There’s all those stories-

Reid: I believe those are called fairy tales or mythology.

Cathy: Yes but we’re culturated to them. So there’s a lot of, “I need to get prince charming and has to have the way of horse, and he has to have a castle. I need to get those needs met through that one person.” Then I’d identified as a [inaudible 00:06:44]. Is that something that you’re-?

Reid: I was thinking about, do you feel last name is charming? And you actually named your child Prince, would that really fuck them up or not? That’s a valid comment. It’s probably out there somewhere.

Cathy: I’m curious if men are culturated to think they have to … I’m really sorry guys.

Reid: No. Back to the big C, culture having its way with you and how we are culturated. Sex is so convoluted and there is so many mixed messages. Your culture is that you grew up in, and what you make things mean. Then there’s inside of the culture, what your parents taught you to make it mean. Then things that your friends influenced you growing up. Basically we’re back to how your childhood formed your belief system, and do you have one, the tools to notice that. Two, the tools to start to change that, because we know now with brain plasticity and stuff like that, you can rewire a lot of your belief systems, and over time kind of re-anchor things. To answer your question on acculturation from men, getting your sexual needs met from one person. It depends on your cultural background and your belief system. You’re supposed to get your sexual needs met from your primary partner, and ‘men’ are also allowed to be a lot more promiscuous than ‘women.’ At some point you’re supposed to grow up and then social needs from one vendor, so to speak.

Cathy: There can be a lot of … it can feel like you didn’t do a good job if you’re still holding on at some level to those acculturations and you’re not getting all your needs met. If your ‘wife’ or your ‘husband’-

Cathy: If they are not meeting your needs, you can feel like, “Oh I’m not desirable enough, I’m not-”

Reid: Or I’m not allowed to get my needs met elsewhere. Now we are back to the advice of, aside from never try to force people to do something that they don’t want to do. If your partner is actually sharing with you that they don’t want to be sexual with you, that’s a good thing if they are speaking about this. You can thank 00:09:01 them from taking care of themselves. Then have a conversation about what’s going on for them, and what’s going on in your relationship as you’re divorcing constantly what you’re making it mean because you are raised in culture.

Cathy: Separating. Divorcing is not-

Reid: Yes. Divorcing … okay, separating. Being present to. Then at the same time what other needs around touch and emotional connection can I get met that are inside the agreements and boundaries of my relationship, so that I’m not completely deprived of my getting my monkey needs met and completely starving, because that makes things worse.

Cathy: When you’re pulling … when you really want something from someone they can feel alarmed and pull back. Thank you.

Reid: What do you think about these stuff?

Cathy: We’d love your feedback. We’d to know how you’re doing with it, and what issues you might be having that you’d like our suggestions on.

Reid: Thank you for your questions, and thank you person that we are already acknowledging for being awesome.

Doing Things in Bed That You Don’t Want to Do